R22 Refrigerant Phased Out: What Do You Need to Do About It?

Home / Blog / R22 Refrigerant Phased Out: What Do You Need to Do About It?

Air conditioning technology is always advancing, but some changes aren’t about making our equipment more efficient or more powerful. For decades now, there has been work done to reduce the environmental impact our air conditioners have. This is an effort going on all around the world, not just in Kansas or the United States. A major part of this push has been striving to eliminate chemicals that hurt the ozone layer.

A new regulatory step in that effort came into play in the United States on the first day of 2020. For some American homeowners, this meant a major change.

R22 is a refrigerant that has been used for decades in residential and commercial air conditioners. First introduced in the 1950s, R22 is the trade name for chlorodifluoromethane. The chemical is also commonly known as Freon, which was the trademark chosen for it by its first manufacturer, the DuPont Corporation.

Even in the 1950s, the damage that refrigerants could do to the ozone layer was understood. In large enough quantities, the common refrigerants of the day depleted the ozone layer and reduced the level of protection it offered from the sun’s harmful UV radiation. R22 was originally considered to be a major step forward when it was introduced because it did far less damage than earlier refrigerants like CFC-11 and CFC-12.

“Less damage” is not the same as “no damage,” though, and in the 21st century, governments have taken steps to eliminate this refrigerant entirely. When released into the atmosphere, it causes 1800 times more damage than carbon dioxide.

Regulatory steps against R22 have varied from nation to nation. In the United Kingdom and the European Union, it has already been phased out completely. The United States has been on a similar path, but at a slower pace.

In the United States, the sale of new equipment designed for the use of R22 was banned in 2010. Manufacturers and maintenance companies were allowed to produce it and use it to recharge already-installed air conditioning systems. As long as the equipment remains in good working order and does not leak, the continued use of it had been allowed.

The United States took a large step toward phasing out R22 entirely on January 1, 2020. Since then, the manufacture and sale of new R22 has been discontinued. There is a possibility that some systems that use that refrigerant can continue to operate using recycled refrigerant, but no one knows how long supplies will last.

Will This Phase-Out Affect My AC System?

If your air conditioning system is over a decade old (installed prior to 2010), it could be using R22 refrigerant. The odds of its use increase steadily as you consider older equipment, and if your air conditioner was installed before 2003, it almost certainly is using it. 2003 was the first year restrictions on R22 equipment came into effect.

A lot of homeowners may be negatively impacted by the phaseout in 2020. Aging air conditioning units are likely to require significant maintenance work. That work can only get more difficult (and expensive!) if the system’s preferred refrigerant is suddenly almost impossible to find.

Checking Your AC for R22

Determining whether or not your home air conditioner uses it should be fairly easy. Check your outdoor AC unit, the condenser, for a nameplate. This nameplate should list the system’s refrigerant. It may also be listed as HCFC-22. You can also check your air conditioner’s user manual. It should list the type used. If you need help determining what type of refrigerant your AC system uses or need advice on how to proceed with an R22 air conditioner, please feel free to contact us at Standard Plumbing, Heating & Air Conditioning online or by calling (785) 776-5012 and we can help determine what your air conditioner requires.

Haven’t We Been Through This Before? 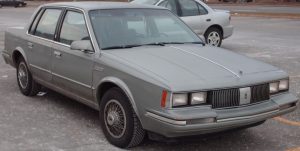 What Will Be Used in Place of Refrigerant 22?

The replacement of choice is R410A. The most popular and widely known brand name for this refrigerant is Puron®, but identical refrigerants are available from multiple manufacturers under a range of different names. R410A was first brought to market in 1991 by a company in the Honeywell organization. Today R-410A is produced by a variety of different companies all over the world. This refrigerant is a great improvement over Freon, as it does not contribute in any way to the depletion of the ozone layer.

To be frank, your options are limited if your home’s air conditioner uses it. Just like the car phase-out from the late 80s, you are facing additional costs no matter what you choose to do.

R22 Cannot Be Purchased By Homeowners

No amount of canny comparison shopping will net you a good deal on R22 refrigerant. It is not sold in local stores or through internet storefronts; the only people who can obtain it are licensed, EPA-certified air conditioning technicians. The cost of buying R22 from licensed technicians is going to rise as recycling it in compliance with new regulations grows more expensive.

Other Refrigerants Cannot Be Substituted
Air conditioning refrigerants are not interchangeable. It’s not possible to swap out some other chemical in place of the R22 your system is designed to use. Although it is feasible to have your system modified to work with a newer refrigerant, this sort of “drop-in” solution is very likely to cost more, in the end, than replacing your system with all-new equipment. Another significant problem is that these sorts of modifications will inevitably void the manufacturer’s warranty on your air conditioning equipment. 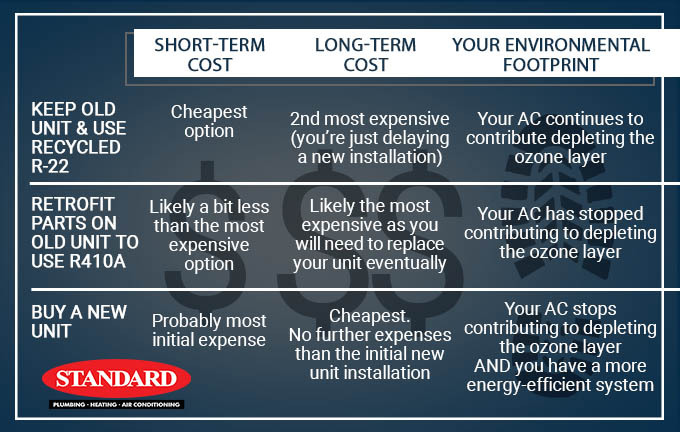 So, What Are Your Options?

As long as your air conditioning system is running smoothly, you don’t need to take any action. But once maintenance or AC repair work requires you to add refrigerant to your system, you have three basic options:

Take Action Sooner Rather Than Later

The best time to work with an HVAC contractor on major air conditioning work is at the end of winter or the beginning of spring. Demand for air conditioner work in the Manhattan area always spikes during the onset of warm Kansas summer weather; this is when the largest number of homeowners discover problems with their cooling systems. Our experienced ac technicians are inevitably in high demand when the Kansas heat first comes out in force, and we have to address our customers’ concerns on a first-come, first-served basis.

Don’t leave your air conditioning situation up in the air until the start of a hot Kansas summer! The new refrigerant regulations could set you up for a nasty surprise. Contact Standard Plumbing, Heating & Air Conditioning before the start of hot weather and let us help you map out a plan for keeping your home cool — not just this summer, but for many hot Manhattan summers to come. 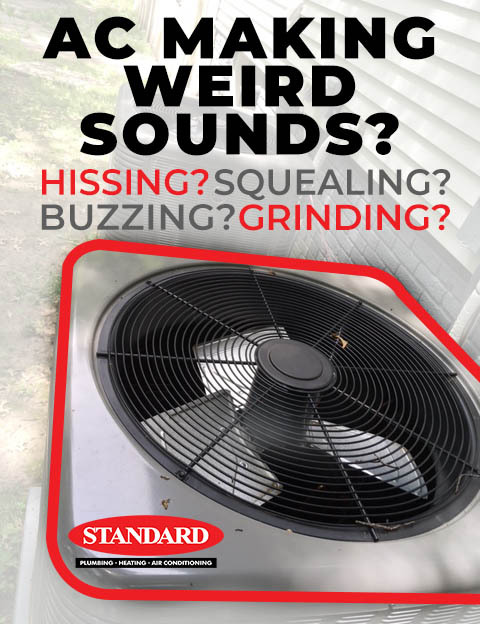 Share on FacebookShare on TwitterShare on Linkedin
Previous
Next

Setting the Standard since 1923.

Looking forward to visiting with you!

James was incredible. Prompt,professional and a wonderful personality. Explained everything,very neat and tidy. I would recommend James highly. Share on FacebookShare on TwitterShare on

Timely service and we were given multiple options to solve a tricky AC problem involving multiple rooms as well as electronic equipment in a business setting. Standard was quick and courteous with a

They did the camera and inspection for a property we were interested in. Their thorough review and estimate on potential repair ( or disaster) has helped us to make an appropriate course of action.

Great experience with a great, professional team! Dalton and his partner were prompt, courteous, and conscientious. They completed the work in a timely manner and took the time to explain every 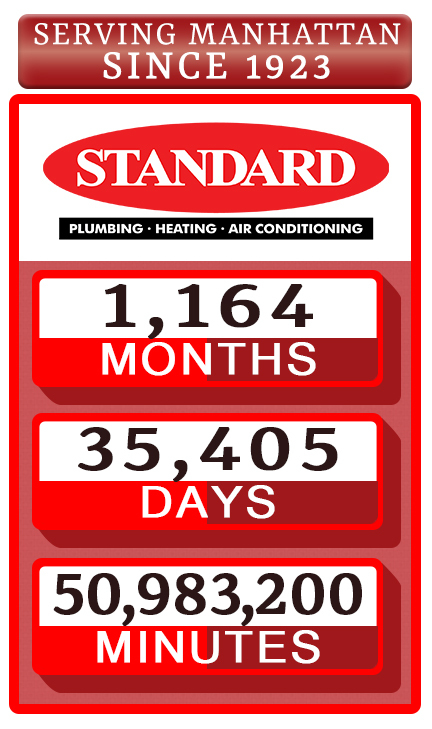 Your Trusted Plumbers & Heating and Air Specialists in Manhattan, KS

With nearly 100 years of history providing homeowners and businesses in the Manhattan area the services they need, Standard Plumbing, Heating & Air is the local company you can trust. With dozens of 5-star reviews, we are proud in knowing customers continue to rely on us for professional and friendly service for their home’s plumbing, heating and air needs.

We set the Standard for only hiring top-notch, professional technicians who are trained to be on the cutting edge of home comfort technology. Customer satisfaction is the secret to our success. We also offer a VIP Preventative program to help homeowners have peace of mind in knowing that our skilled team will make sure their systems work exactly as they should all year round.

We serve Manhattan, Wamego, Junction City and the surrounding Kansas towns. We are conveniently located at 609 Pecan Circle in Manhattan, KS. From Fort Riley Blvd, turn heading south on Pecan Circle and we’re immediately on your left.

Take Advantage of 0% Financing on All Installations TODAY!